The Old Man and the C Chord

9 new original songs, and 1 cover. Digital Release on Friday, November 4. Hard copy release Wednesday, November 30 (in time for Christmas!). CD includes a 12-page booklet with lyrics and notes on all the songs (download includes a PDF).

Thanks for your interest in my new album! Here’s a few words about it.

With the exception of one cover, the ­­songs here were written between spring 2020, and summer 2022. Obviously, this was a time of forced reckoning on a societal level, but I think for most, on a personal level as well. For those of us un-essentials lucky enough to have a decent place to “shelter in place” (no small thing), and no children to school, the unprecedented full-stop that happened in all our lives left us with a unique opportunity for self-reflection and creativity (interspersed with freaking out, making bread, binge watching etc.).

For me, it was the longest I’d been off the road for about 15 years. I recognized that this blank time-canvas was actually something that I’d been craving for a while. I found myself up before dawn most mornings playing music in a way that I hadn’t in a long time - not preparing for anything in particular – in fact, not even sure that there would be anything to prepare for anymore – just letting it go in whatever direction it wanted to go in, for however long it wanted to go there.

The direction it seemed to want to go most often was to write folk songs on a lovely 100-year-old guitar about the stuff that was on my mind at the time. And there was no shortage of stuff on my mind - I was reckoning with the approach of my 50th year on the planet, in love, navigating my own mental health journey, and coming to grips with the death of a parent. I was thinking about gratitude a lot, and even more in awe of nature than usual.  I was taking stock of a career choice that on some days felt something like destiny, and on others felt like a 30-year vanity project. And although the world seemed to be on fire, there was a feeling of hope that wouldn’t seem to go away...what an absolutely perfect storm for a folk singer!

I recorded these songs piece by piece over the course of the last two years – sort of as they’d arrive. My long-time friend and collaborator Andrew Collins recorded the album for me. As we’d both gotten into working with video during COVID, we often either filmed the sessions or made more theatrical videos after the fact. I released some of these songs as “singles” to the streaming services but had always thought of them as part of a whole album.

This is an album of mostly duets. I recorded all of these songs solo, but often added one more instrument, played by a special guest, to add just a bit of colour and vibe. You’ll hear Burke Carroll on pedal steel, Ivan Rosenberg on dobro,  Andrew Collins on mandolin, Gavin Gardiner on organ, Andrew Downing on bass, John Williams on clarinet, John Showman on violin, and Lyle Molzan on drums. 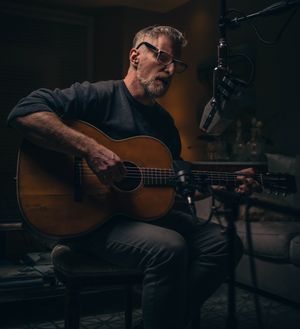 The Old Man in the title doesn’t just refer to me; it is also a nod to the beautiful turn-of-the-century guitar that I recorded seven of these songs on (the other three on banjo). I bought The Old Man at a camp about ten years ago. I wasn’t in the market for a guitar, but there was something about the sound of this one that was immediately enchanting. I couldn’t really afford it but asked the owner (Anthony Kost) if I could play it for the night. I decided that if I wrote a song on it that night, that I would keep it. I did, and ever since, The Old Man has been my constant songwriting companion. Don’t ask me what kind of guitar it is. It has no label...it’s just The Old Man.

Finally, I want to make note of the beautiful and evocative cover of this album. It was done by my friend Nico Humby. I sent him some examples of vintage covers from the Hemingway novel “Old Man and the Sea” and asked him to try and capture the vibe. My one request was to have the setting/rising sun in it somewhere, as the relationship between light and darkness is a reoccurring theme on the album. Look at what he came up with. Thank you Nico!

There’s a little bit of info on what this album is about. I hope you might consider picking it up!